Kitra: Election Cakes are part of the largely forgotten American tradition of bribing people to participate in democracy. First it was politicians offering free booze outside of polling locations, then the country turned to cake. Women made massive batches of election cake and offered them as incentives to come to vote. And we’re not the only ones who did this. In Australia, it’s still a common practice to serve “democracy sausages” outside of polling sites.

Jordan: Kitra vaguely remembered that one of the early presidents once won an election by providing free booze at the polls. Turns out it was George Washington, who lost his first election in Virginia but won the second by spending his entire campaign budget on alcohol.

Speaking of presidents, our election cake inspiration came from an 1887 White House cookbook full of poison antidotes and cake recipes that seem to be missing most of their ingredients and all of their directions.

The full recipe for Election Cake:

Three cups milk, two cups sugar, one cup yeast; stir to a batter, and let stand over night; in the morning add two cups sugar, two cups butter, three eggs, half a nutmeg, one tablespoonful cinnamon, one pound raisins, a gill of brandy.

Brown sugar is much better than white for this kind of cake, and it is improved by dissolving a half-teaspoonful of soda in a tablespoonful of milk in the morning. It should stand in the greased pans and rise some time until quite light before baking.

That’s it. That’s the entire recipe.

ONE CUP OF YEAST. YEAST!

How long does it bake for? What kind of pan? No one knows!

So obviously we had to make it. And also a safety cake with flour, instructions, and a very reasonable amount of yeast.

To reconstruct this cake, we started by assuming that it was wrong. Four cups of sugar and no flour sounded like a disaster, but two cups of flour and two of sugar might work. We decided that the first mention of sugar must have been a mistake and swapped it for flour. We also reduced the yeast significantly. We cut it in half to account for using active dry yeast rather than fresh yeast, then again for the advances in yeast effectiveness that have probably happened since 1887, then reduced it a bit more for good measure.

I just thought it should be a living buzoozle of yeast.

That felt like a bad idea. Also like a cup of yeast would be kind of expensive.

You don’t need to butter this cake. This cake is ALL. BUTTER. My immediate reaction upon turning it out was “So greasy…”

In fact, testing it with a toothpick was very concerning because even though the cake still felt quite soft, the toothpick came out with nothing but butter on it.

A selection of our reactions to this cake upon trying it:

“What the hell is this?”

“It’s like we invented baked oatmeal, but without the oats.”

“It’s like we already made french toast out of the other cake.”

“This is bread pudding.”

It has potential, though. We’ll revisit it next time there’s an election. Until then, here’s a recipe that actually works… and, if you want it, our variation on the 1887 cake. We recommend you make the former. 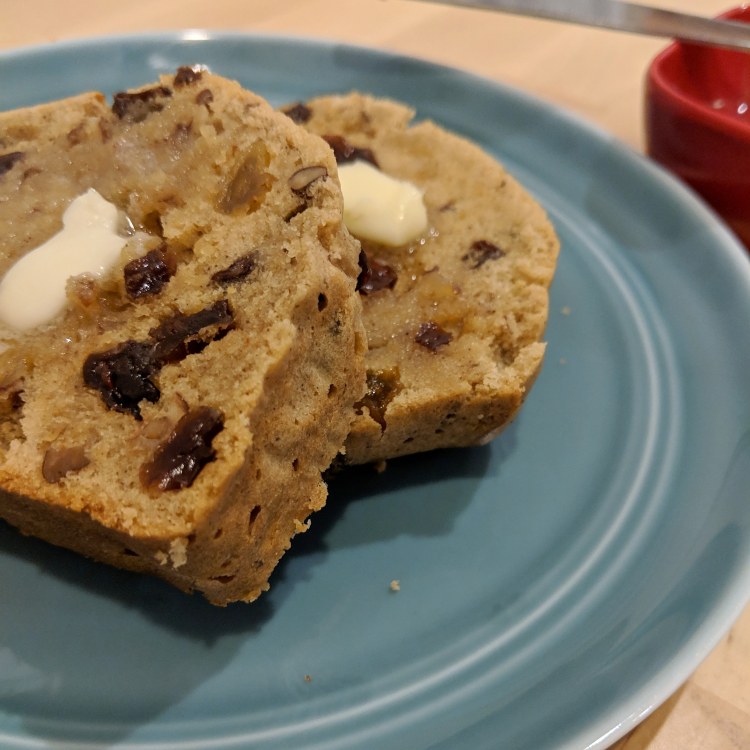 Adapted slightly from Food52, where it was in turn adapted from I Hear America Cooking by Betty Fussell and American Cookery by Amelia Simmons

While we didn’t discuss it much, this version is a pretty good cake! (It’s the one in the first and last pictures in this post.) It’s closer to a bread, which makes it an excellent breakfast cake or afternoon snack. It’s great on its own or with a bit of butter. Fair warning that the alcohol doesn’t cook all the way off, which also makes it a good way to drown any election-related sorrows you might have without looking like an alcoholic.

Our only real change was to use brown sugar instead of white, because “brown sugar is much better than white for this kind of cake.” This recipe is supposed to be made in two smaller 8”x3” loaf pans; we used foil 8”x4” pans. A 9”x5” pan would likely just hold it, maybe with a couple of muffins or a mini-loaf left over. We also found that the recommended 2-3 hour rise time was longer than necessary and have shortened it here.

Combine the raisins, wine, and brandy in a bowl and let soak while you make the rest of the cake.

Next, make the sponge. In a small bowl or glass measuring cup, combine the yeast and milk. Add 1 cup flour to a medium bowl and pour the milk/yeast mixture over top. Add the molasses and stir with a silicone spatula until smooth. Cover with plastic wrap until doubled, 1 to 2 hours.

Once the sponge has doubled, preheat your oven to 350° and line two 8″x3″ pans with parchment paper.

In a medium bowl, mix together flour, cinnamon, coriander, allspice, salt, and pecans.

In a large bowl, use an electric mixer to cream butter and brown sugar until light and fairly fluffy, about 3 minutes. Add eggs one at a time, beating to combine between each. Scrape down the bowl, then add the sponge (the yeast mixture) and mix until fully combined.

Add the flour mixture and mix on low until just roughly combined, then add the raisins and any alcohol they haven’t soaked up and mix until fully combined. (This last step may be easier with a spatula.)

Divide dough into prepared pans and bake for approximately 50 minutes, until a toothpick inserted into the center comes out clean. Let cool for at least 5 minutes before removing from the pan. Serve warm, with butter.

Adapted, liberally, from the 1887 edition of the White House Cookbook

First, make the sponge. In a medium bowl, whisk together yeast, milk, and 1 cup flour. Cover with plastic wrap and let sit at room temperature for about 2 hours.

In a medium bowl, use an electric mixer to beat butter and sugar until combined and creamy. Add eggs one at a time and beat until combined. Add the nutmeg and cinnamon.

Add the brandy, sponge, and flour and stir as best as possible using a silicone spatula. Stir in nuts and raisins, and pour into a 9”x5” loaf pan. It will come fairly close to the top, but don’t worry, as it doesn’t rise much in the oven.

Bake for approximately 50 minutes, until a toothpick inserted into the middle comes out free of batter. Let cool most of the way in the pan before serving.

One thought on “Election Cake”