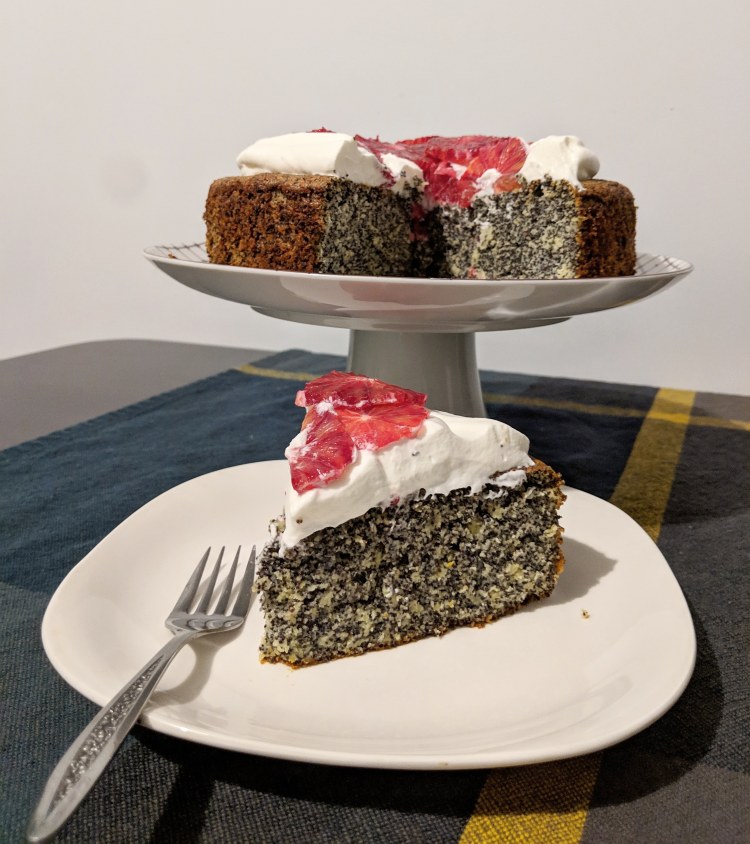 And when we briefly lived there, the holidays were marked by a Black Friday-esque battle for oranges at the grocery store.

Imagine, if you will, dozens of middle-aged eastern Europeans, swarming the aisles of Tesco to fill their carts to the brim with boxes and bags of oranges. We’re not exaggerating here; people would buy literal cartloads.

Every person you passed in the store had nothing but oranges in their cart.

To this day, all of my Googling has been unable to come up with an explanation for this surreal phenomenon. We’ll blame it on the Soviet Union, just like all of the rest of Hungary’s idiosyncrasies.

So we paired a documented Hungarian tradition with one we’re only mostly sure we didn’t dream.

Here’s hoping this cake brings you a bright, lucky, and only mildly perplexing 2019.

We also did some other things since we last posted!

While we may revisit some of these in later posts, we’ll share the links here now as a belated Christmas/Hanukkah gift to you and an apology for being gone so long.

Spiced Brown Sugar Pound Cake | We’ve had this bookmarked since it first went up on Shutterbean more than a year ago and recommend that you don’t wait nearly as long as we did to make it. It’s from Julia Turshen’s Feed the Resistance and it’s truly excellent.

Olive Oil Cake with Farmer’s Cheese Filling | We made this, as Alice Medrich suggests, as a Hanukkah cake but it was delicious and would be welcome all year round. We swapped farmer’s cheese for the creme fraiche in the filling, but suspect it would be great either way.

If you like poppy seeds, this cake has a lot going for it! It’s moist and light, gluten-free, and is interesting enough to serve for dessert but not so sweet that it can’t be breakfast or an afternoon snack. If you don’t like poppy seeds, then this is really not your cake.

We used orange in the batter, in keeping with the theme, but you could also use lemon (as in the original recipe). We top it here with a lightly sweetened whipped cream and fresh blood oranges, but it would also be good on its own or with a light icing.

We used a very small blood orange but have adjusted it here to use a regular one and increase the amount of orange flavor in the cake itself. We strongly recommend doing the almonds and poppy seeds by weight, so convert those to cups at your own risk.

Preheat the oven to 350°. Grease an 8- or 9-inch round cake pan and line the bottom with parchment paper.

Add sugar to a large bowl and zest the orange over top of the sugar. Use your fingers to rub the zest into the sugar to help release the orange flavor.

Once you’ve zested it, cut your orange in half and juice one half into a small bowl. Toss the grated apple with the juice and set it all aside.

Separate your eggs. The whites should go into a clean large bowl, while the yolks can go on top of the orange sugar. Using an electric mixer, beat the whites until they reach soft peaks. Without bothering to wash the beaters, beat the egg yolks and sugar until pale and creamy.

Add the almond flour and poppy seeds to the egg yolk/sugar mixture and mix until well-combined. Mix in the grated apple (along with any juices in the bottom of the bowl), then the baking powder. Using a spatula, gently fold in the egg whites.

Bake for 40 minutes, until the top is golden and set and a toothpick inserted into the center comes out clean. Let cool fully before serving with whipped cream and sliced oranges.